The Blurry Man[1]
The Demon
The Horrid King

"I touched her soul once. Soon, it will be mine forever, then you will give it to me."
—Moloch prophesying Abbie Mills's soul[src]

Moloch, also known as "the God-Demon of Child Sacrifice", was the main antagonist at the beginning of Sleepy Hollow, with the goal of bringing forward the Apocalypse. As such, he was responsible for the raising of the Four Horsemen.

This article is a stub. You can help SleepyHollow Wiki by expanding it.

- In the beginning fallen angel Moloch waged alongside Devil a war in Heaven against God and Archangel Michael but they lost in the end, afterwards Devil and his many fallen angel followers became like Moloch the demons and were doomed in Hell. While Moloch after his fall from grace, was banished to Purgatory and became its warden.

- For centuries, Moloch attempted to jump-start the Apocalypse many times, even before the birth of the United States of America, such as sending the Horseman of Conquest to Roanoke in 1584. During the American Revolution, he had his demons and servants infiltrate the British forces, planning to use the war to bring the destruction he so craved. Also, he was spoken of in several theological and religious books, notably the 17th-century poem Paradise Lost by John Milton.

In 1774, he approached the dying Abraham Van Brunt and made a deal with him: Abraham would sell his soul to Moloch and become Death, one of the Four Horsemen. In exchange, Abraham would receive Katrina once the Apocalypse began. Abraham thus became the Horseman of Death, went on a rampage killing spree. However, Death was defeated by Ichabod Crane, who beheaded him on the battlefield, sending Death into a state of suspension.

In the 1800's, he managed to imprison the powerful witch Katrina Crane of the Sisterhood of the Radiant Heart in Purgatory, as per his agreement with Van Brunt.

The first recorded Sleepy Hollow sighting of Moloch was by a farmer who spotted him in 1882, when he appeared near four white trees in Pocantico Grove. He would return centuries later, when he was seen by Abbie and Jenny Mills.

Afterwards, Moloch sent a Tree Monster after Katrina (who had become Ichabod's wife), who was staying at Fredericks Manor to give birth to her and Ichabod's child, Jeremy. In the 1800's, Moloch imprisoned Katrina in Purgatory indirectly by proxy (Katrina's former coven companions known as The Four Who Speak As One) so she could be given to Abraham when their deal was complete. He then spent centuries around Sleepy Hollow, sowing his plans and having the Hessians infiltrate the town so his servants were always on hand. The first recorded Sleepy Hollow sighting of Moloch was by a farmer who spotted him in 1882, when he appeared near four white trees in Pocantico Grove.

In 2000, almost 13 years before the resurrection of Ichabod and the Horseman of Death, Moloch arrived at Pocantico Grove and freed Ichabod and Katrina's son, Jeremy Crane (later known as Henry Parrish), from his underground grave and turned him into the Horseman of War, appearing with four white trees to act as an omen of his Horsemen. Due to his nearly murder by the Four who Speaks as One, his growing hatred towards his own parents who he believed to have abandon him, and not knowing Moloch is the source of his sorrow, a freed Jeremy regaded Moloch as his true father. At that time, the young Abbie and Jenny Mills was there and witnessed Moloch (in fact by fate due to Abbie's Witness identity), but the sisters were far too weak to confront and Moloch erased their memories, trapping them in Purgatory.

This event was the beginning of the girls' downward spiral in life. Abbie denied the experience and said she merely fainted while Jenny stated the truth until she was deemed insane, and was later institutionalized. It was here that she faced repeated possession by a demon. Both girls were later met by Sheriff August Corbin, who helped give both girls direction in life. In the case of Abbie, she was inspired to become a police officer.

However, Jenny was less lucky. For more than 10 years, Moloch had been haunting Jenny as a shadowing illusions all the time. Also, he sent his lieuteanent possessor, Ancitif, to control Jenny and take down Abbie. However, thanks to Sheriff August Corbin's exorcising on time, Jenny was saved from Moloch's claw again. She later aided Corbin by tracking down artifacts of importance.

Following Moloch's awakening of the Headless Horseman, he has also killed and resurrected police officer Andy Brooks, and instructing him to bring back Serilda of Abaddon to life. He also used Ro'kenhronteys to get to Abbie, and The Shadow Warriors to regain The Lesser Key of Solomon, in order to open the gates to Hell. He had also sent his minions to retrieve Death from his imprisonment yet had his minions stop Death from killing Ichabod.

In the season finale of Season One, Moloch approaches the church Katrina has resided in while both Abbie and Ichabod were inside, trying to make the decision of to either save or not save Katrina. Eventually, Katrina and Ichabod leave, trading Abbie's soul for Katrina's. Abbie, now stuck in Purgatory, tries to hide from Moloch, eventually confronting him. During the confrontation, Abbie burns Moloch with the pendent that Katrina gave her when she left with Ichabod. Abbie, frightened, runs and eventually gets trapped in a place that looks similar to her childhood dollhouse. Here it's revealed that Abbie and Jenny's memories of the eclipse are trapped in Purgatory. After this, Moloch is not seen until Season Two.

He was first mentioned in the premiere "This is War." After Abbie was trapped in Purgatory, and Ichabod was buried alive, a year had passed. Katrina and Jenny were killed off, while the Witnesses were still standing. By the time they got to Henry, however, he revealed it was all an illusion. This was only a ploy to find the key to Purgatory, so he could succeed on merging his territory and the living world. After Ichabod managed to escape from his burial, found Jenny, and made it to the key, he reopened Purgatory to save Abbie's soul. And it was there that Moloch was disguised as Crane giving Abbie a drink; being that no one should drink anything, otherwise the soul is forever Moloch's. After a fierce confrontation, Moloch convinces Abbie that they should escape and reunite with her sister. But due to a slip of the tongue saying her rank wrong, the illusion was decapitated, and he reveals another form: a demon on horseback. He chases the Witnesses out, but fortunately didn't escape. Although he was able to make Henry as the new vessel for the Horseman of War.

Throughout most of the second season's first half, Henry has been adding ingredients to free his master. With bone particles from a Piper's flute, Moloch was nearly successful. He first punished Henry for the Weeping Lady being killed. She was the Hellfire shard, the next vessel; however, he chose Katrina to be the proper replacement. As Katrina was sleeping soundly a deadly spider entered her mouth. Apparently, he was trying to make a lethal exit, or delivery, from Katrina herself which caused excruciating pain and agony to her. Fortunately, he was thwarted as Ichabod used the shards Ben Franklin made to resemble the Aurora Borealis. Moloch did, however, make a semi-appearance as he wound up inside a cradle, according to her visions. He was seen with Henry and the Heartless being fed with the soul jar. Since then, it was able to grow rapidly: from a slimy green demon, to a newborn baby, to a human kid, to a mature man, and finally to his demonic form.

His last stand was made in the mid-season finale as he and the two Horsemen captured Katrina for the binding ritual. After getting the Sword of Methuselah, the Witnesses headed to Fredericks Manor to put a stop to the impending apocalypse. Meanwhile, Moloch was at Potantico Grove with Henry. Each tree was being struck, causing a catastrophic event. He eventually ordered Henry, after being injured by Irving, that he must obtain the blade. While the team was tricked, Henry was able to retrieve it, and they were sent to Moloch. Abbie, Jenny, Katrina, and Ichabod were held captive as Henry gave a brief description of the Akeda. Because of his hatred toward his parents, Henry decided to slain Katrina, until Crane volunteered he should be the first to be sacrificed. After a few moments of hesitation, Moloch was killed by Henry using the sword. It put an end to him, as well as a great earthquake resulting a few refugees, including Orion, Henry, and Irving.

Moloch was pure evil. He seeks to corrupt, to destroy, to bring about the End of Days. Moloch's minions were all but expendable pawns to him, whoever they were and did not suffer fools, being very unforgiving to failure, and any promises he makes means nothing to him, as he will break any if it suits him. This is shown in the Season 2 mid-season finale when Henry realized that the thing who he considered a father turned out to be using him. He will make use of any and every method possible to meet his ends, no matter how deceitful and underhanded, and he did not care how many lives were suffered to achieve his goals.

As an extremely powerful demon and the bringer of the apocalypse, Moloch had several powers that were unique to him, which he used to get out of Purgatory and destroy all human beings.

The General of the Four HorsemenEdit

As the one behind the creation of the Horsemen of Death and War, Moloch was considered to be the master of the Four Horsemen of the Apocalypse. He requires a pact between himself and the person that would become one of his Horsemen in the transformation process.

Moloch became Andy's master after he sold his soul to him. He once failed a duty back in Season One, then he was killed and resurrected. It was then that he decided Andy should raise the Serilda of Abaddon. As he was disguised as an undercover cop he buried the remains and killed off some of her enemies. Then, he was a translator for the captured Hessian, until he, Death, and Moloch's minions escaped. As he pleaded to be loyal to Moloch's army, he was transformed into a demon. But was reluctantly killed by Abbie and spent his afterlife in Purgatory. He later gave Abbie help discreetly on how to survive, otherwise he'd be torn to pieces by the demon.

As Abraham lay dying, Moloch approached him and offered him Katrina in exchange for becoming the Horseman of Death, which Abraham accepted without question.

During the time he was buried alive in his coffin, Jeremy developed a great hatred and desired vengeance towards the world. Moloch came to him and offered him the chance to obtain revenge as the Horseman of War, and Jeremy accepted the pact and viewed Moloch as his true father, resenting his real parents. However, Moloch did not return any sentiments to Jeremy, seeing him only as a soldier to follow his commands, as well as an expendable pawn. His cruelty towards Jeremy, however, leads to his demise when Jeremy finally sees Moloch for what he was, and stabs the demon with the Sword of Methuselah.

It was unknown when Moloch came to the Horseman of Conquest/Pestilence, but it was possible that this occurred sometime before the Revolutionary War as he was over three centuries old. It was also possible that this Horseman was acting under Moloch to spread his plague in order to enter the mortal realm to join up with Death, but was imprisoned as the disease was contained by the spirit of Virginia Dare. 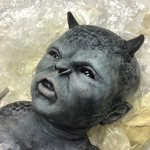 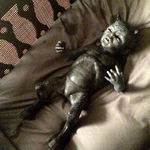 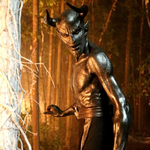 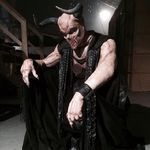