"A Legend is Reborn"

After Ichabod Crane "dies" during a mission for General George Washington in 1781, he awakens in 2013 in Sleepy Hollow. But so does the Headless Horseman, whose head Ichabod lopped off before his perceived death. The Horseman begins his nightly killing spree, and Ichabod must partner with lieutenant Abbie Mills, trying to stop him.

While hunting the Horseman, Abbie looks into the old case files her longtime mentor Sheriff August Corbin, who becomes one of the Horseman's first victims. In doing so, Abbie and Ichabod learn of two types of occult groups: one fighting for good, once lead by Ichabod's wife Katrina Crane,  who is now stuck between the living and the dead; and the other serving evil, and possibly being responsible for having resurrected the Horseman. Coming to believe that the Horseman is of the Four Horsemen of the Apocalypse, as foreseen in the Bible, Ichabod and Abbie are faced with their own demons, as well as powerful and evil characters from myths and legends, in their fight to prevent the ending of the world.

Ichabod must also adjust to the social and technological differences of the 21st century. Given the fact that he claims to be from the time of the Revolution, local law enforcement - not the least Captain Frank Irving - sincerely questions his sanity, but finds him an reliable ally in fighting the evil suddenly popping up all around Sleepy Hollow. 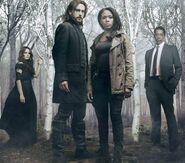 Behind The Scenes The Founding Fathers Season 1 SLEEPY HOLLOW

Demons Of The Past Season 1 SLEEPY HOLLOW

Behind the Scenes With The Creators Season 1 SLEEPY HOLLOW

Just Being Headless At The Office Season 1 SLEEPY HOLLOW

Retrieved from "https://sleepyhollow.fandom.com/wiki/Season_One?oldid=26077"
Community content is available under CC-BY-SA unless otherwise noted.